Our club was founded by a small number of enthusiasts, who decided in 1980 that a club was needed for these magnificent cars. However, because of the small number of Hillman, Humber , Singer and Sunbeam(Talbot) cars still on the road at that time, the idea was born to create a ROOTES club ,which would try to preserve these makes for the next generations.

Years later, in 1988, we decided to form an legal association –vzw/asbl ; this because of the international meeting at Brussels celebrating the 25th anniversary of the SUNBEAM VENEZIA by Touring of Milan (built accordingly to the Superlegerra principle). We had to cross the whole city and his suburbs escorted by the police, so a legal association was found the best method to protect our members against unforeseen circumstances. The same year we took part in the formation of the Belgian Federation of Ancient Vehicles as a Founding Member!

Meanwhile our club has always, and this for years now, more or less a hundred members; most of them are the proud owners of a Sunbeam Alpine or a Hillman Minx,
without forgetting the exclusive Singers and Humbers! We are having members all over the country , as well in the North as in the South. When we organize rallies we try to do so in both parts alternatively.

The Committee is elected for a period of three years, and is constituted of a President, a Flemish secretary, a French secretary , a treasurer and a responsible for the club stand at the main Belgian indoor-exhibitions.

This site comes at a moment that the Internet becomes part of our households. You will see in the following weeks and months quite a lot of changes to the site. We plan indeed,
a series of pictures in these pages, the main technical specifications of all Rootes cars, a colour archive of all models, and if you send us a mail to buy or sell we will try to implement this advert on the site.

In a next period we will make the “News” available on the site, so you will be able to pick relevant articles you are interested in! Of course, the paper “News” stays available
as The first contact item with the club.

At last, if you happen to have documents which we can scan, or know about a car “for sale” in the countryside of which you made a digital picture……send these items to our mail address:

It’s finally here! We can and will meet again! That is why Patrick and Marlies Zeeuws are organizing a Rootes Meeting with departure from their home. There we are offered a breakfast snack in the garden, after which we leave for a tour to the Craywinckelhof in Lubbeek.

Please all register! (all info in the attachment below – open the entire message by clicking the tittle)

It is with great sadness that we have to report the passing of one of our first members; Willy Gios.

Willy Gios was one of the best care takers for our Rootes name, particularly for his own Sunbeam Venezia and Alpine!

Our support goes to his wife, Chris, and family in these sad times. 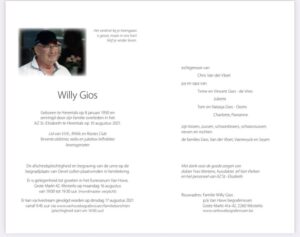 It is with great sadness that we have to report the passing of one of our co-founders and member.

Frans Vandeghens was known to most of you for his presence at all of our general meetings as well as the Antwerp Classic Salon.

Our support goes to his wife and family in these sad times.

Due to the Corona situation we are obviously restricted to our homes and close environments. Therefor we cannot organise any meetings. In conjunction every event on our diary is cancelled up until the end of June. If we are allowed to plan new events, meetings, .. we will send you invitations as soon as possible.

Our general meeting for the 14th of February will be cancelled due to Brasserie-B being declared bankrupt.

We have found an alternative, Brasserie Jo, pullaar, 222, 2870 Puurs, only a few miles away from our previous location.

If all goes to plan we should be able to arrange the meeting on friday 21th of February.

We will send out all details A.S.A.P.